Sabaki-do Karate is one of the most up-to-date karate styles and methods of self defense.

Sabaki-do Karate is based on the fighting karate of Ashihara founded by Mark Stewart in 2013, click here for more information about the history of Mark stewart and the inception of Sabaki-do Karate. However, it is not limited to one way. The Principle of SABAKI (Japanese word meaning – to channel power efficiently) and the idea of redirecting your opponents attack, or positioning yourself out of the line of attack to a blind spot position, should be practiced regardless of style to any technique that makes fighting and self defence more realistic and practical for all practitioners. 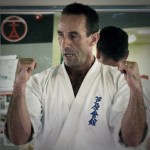 Mark Stewart has studied a range of martial arts throughout his career and founded SABAKI-Do Karate in New Zealand in 2014. The aim of SABAK-DO is not to create a style, but more to establish a system based on principles that have flexibility for all uses regardless of size, gender or physical attributes. The goal is to use the knowledge Mark has gained and the experience he has acquired, to develop a system that is unique to each individual. SABAKI-DO will lay a strong foundation of marital arts for the practitioner to then study and develop their own style.

Mark Stewart has taught and studied martial arts for over 40 years. His first introduction to martial arts was at the age of 8, when he studied boxing for 3 years, having some 16 fights in total. He went on from here to join Sounji ryu karate, which was a traditional style, to which he was involved for some 14 years attaining a 2nd dan black belt. During this time he also studied American sport karate (Jhoon Rhee system) attaining also a 2nd dan black belt.

Mark also trained briefly in Tae Kwon Do here in New Zealand, Attaining an honory black belt, and whilst overseas, he continued his Tae Kwon Do training in America and Scotland recognized as a Tae Kwon Do black belt.

On his return to New Zealand, Mark was introduced to Ashihara Karate, and trained and taught it till 2014, choosing this style for its practicality and rationality. Mark was the Ashihara Branch chief instructor for NZ for over 10 years.

In 1998 Mark traveled to Okinawa to compete in the World Goju Ryu karate championships, where he won gold in the light heavy weight full contact division. Prior to this Mark had already competed in some 3 world Championships in Denmark .

SABAKI-DO was a natural progression to enhancing and improving the ever changing styles of martial arts.

The concept of Sabaki-do is to use what’s useful and discard what’s not. Therefore you take away restrictions of style and have an ongoing study of constant and never ending improvement.